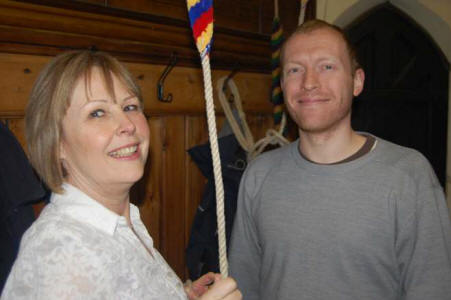 During March and April, the BBC East, in partnership with the Learning and Skills Council, encouraged members of the public to learn a new skill. In Suffolk, several of the BBC Radio Suffolk Programme Presenters rose to the challenge, and attempted to learn such skills as driving a bus, playing the clarinet, and giving body massages.

However, the popular Radio Suffolk Presenter, Lesley Dolphin, chose, as her challenge, to learn to ring church bells. She said it was something she had wanted to do for a long time, having for a time lived next to the church in Long Melford in Suffolk where she had loved hearing the sound of the bells. Richard Munnings, the Ringing Master of St Mary‑le‑Tower in Ipswich, and who is also the Ringing Master of the Suffolk Guild of Ringers, undertook to teach her. In this he was ably assisted by Alan McBurnie from Hollesley and Kate Eagle from Ufford. Lesley's first lesson was before the normal Monday night practice at St Mary le Tower on March 23rd. Within half an hour she was comfortably managing first the backstroke, and then the handstroke, whilst at the same time making recordings to be used during her regular Tuesday afternoon radio broadcast. The following Monday, again at St Mary‑le‑Tower, she quickly progressed to being able to handle a bell single-handed, and she proudly announced to her listeners that they could hear her first "real dongs"!

As there was no ringing at St Mary‑le‑Tower on the next two Mondays, it being first Holy Week, and then Easter Monday, Richard, Alan and Kate took Lesley to Hollesley to give her some lessons on the Hollesley simulator. Here Lesley made further progress, and progressed to ringing rounds on three.

Lesley's final lesson, at least as far as the formal challenge was concerned, took place again at St Mary‑le‑Tower on Monday April 20th. On this occasion Lesley was accompanied by a reporter, cameraman and sound recordist (Jon Wright), who had come along to make more recordings for Lesley's afternoon programme and for the Radio Suffolk web Site.  That evening she was really plunged in at the deep end by Richard, starting with rounds on three, then covering to Plain Hunt Singles, followed by rounds on six, and finally covering to a plain course of Bob Doubles (a piece of ringing that received high praise from the regular ringers who by now had assembled in the tower).

So, within the space of a month Lesley progressed from being a complete novice to being quite a competent ringer, able not only to handle a bell single-handed but also able to ring the cover bell accurately to Doubles. However, because she is a broadcaster, and also a staunch supporter of Ipswich Town Football Club, Lesley has a very busy schedule. So we do not know whether she will have the time to be able to continue to ring now that the Big Skill Challenge has finished. We would hope so. She certainly has the talent.