After many years of arranging trips to Italy, it was wonderful to have three of the central Bologna ringers visit Suffolk. Over the years, their arrangements and hospitality had been fantastic and finally there was a chance for me and my fellow travellers to Italy to reciprocate. It was also going to be interesting to see how they got on ringing with a rope under the bells rather than next to the bells. Also 45cwt and 62cwt rings of four in Bologna are a little different to a mini ring, a 6cwt six and an 8cwt twelve.

Another slight problem was that they were arriving in Suffolk on Good Friday and leaving at 8.30 a.m on Easter Sunday, not an ideal time to be ringing. My thanks to all the clergy and local ringers who allowed their bells to be rung on days when ringing is not the norm. 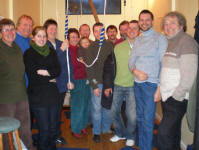 Having picked up Mirko Rossi (president of the Bologna ringers), Matteo Broccoli and Nicola Cesari from Stansted, our first visit was to East Bergholt, a system, like the Bolognese, where the ringers are very close to their bells. The bells were half-muffled, something not done in Bologna. After that a few miles down the road to Gordon Slack's mini ring. After a couple of demonstrations of traditional English ringing, our three visitors were let loose. Very quickly handling and rounds were mastered. Knocking behind was not a new concept, so both Mirko and Matteo performed well to Bob Doubles. But how would they fare the next day on church bells?

Traditional food for dinner - Bombay Nite in Walton - after a visit to the pub for some real ale. Both aspects also accomplished with style after a little trepidation. 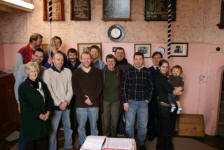 Saturday morning Monewden in the freezing cold - a light six rung from a gallery. After some demonstrations, time to find out whether our visitors could adjust to having some weight to pull. Answer yes and so quickly. Bob Doubles behind accomplished within minutes. The only aspect that seemed to cause a minor hiccough was that they could not see the bell dropping - relying solely on the feel of the rope was not normal. Before we left, Mirko, Matteo and Nicola rang 4,5 and 6 to rounds together. The really impressive part of this was that they did not go wrong if each other had a little blip. Over to Grundisburgh for demonstrations of 10 and 12 bell ringing. All our visitors ringing rounds and call changes on 8. Lunch at the Turk's Head, Hasketon, followed by the heavy 8 at Woodbridge. Our visitors adjusted to these heavy bells with relative ease.

Everyone was invited back to my house at Walton for dinner. Thank you Liz for cooking for 20 in total! No beer but a lot of Italian and other wine.

A terrific experience, ringing with my good friends in my country. It is a shame they could not stay a few days longer as I am sure they would have appeared in the quarter and/or peal columns. My thanks to the 20+ ringers who turned out in the cold over the two days. 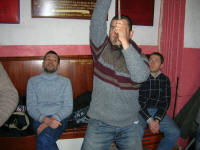