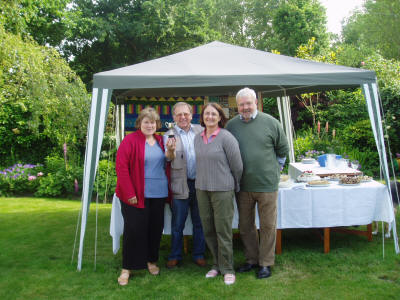 This fundraising event, held on 14th June in aid of the restoration and augmentation of Campsea Ashe bells, started life as a fun ringing competition. However, as the plans progressed, we decided that our ring of four was too special for a traditional striking competition! So the event became a festival! Each of the eight teams brought their own judge (who did not need to be a ringer) and the aim of the afternoon was to make as pleasing a sound as possible on the somewhat quirky bells. Whilst this was going on, some ringers chose to ring quarter peals at nearby towers, try out the Abel computer programme, ring hand bells or stroll through the village, following our new Heritage Trail.

Later in the day, around forty ringers adjourned to a nearby garden, where we were treated to a delicious supper. A silver cup was presented to Hollesley, the winning band, by Rev Canon Harry Edwards, who is a Vice President of the Suffolk Guild as well as the Chairman of our Bell Project. Over £350 was raised at this event and we have already fixed a date for next year- Saturday 6th June. So make a note in your diaries! Will Hollesley keep the cup next year? This is an unmissable event!