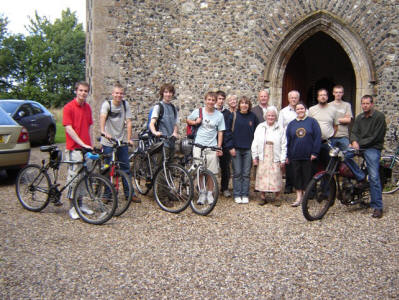 The day started with the cyclists meeting outside Michael’s house at 08.30- having decided the previous Tuesday at practice that 1¼ hours would be ample time to cycle from Debenham to our first tower Cotton. Well at least the day should have done, except when I arrived at slightly past 08.30, there was no sign of anyone else, so I cycled down to the church to make sure no one was waiting there, with nobody outside the church I cycled back home to confirm it was at Michael’s house I was going to meet the others. Having confirmed I’d been in the correct location I headed back to thankfully see Phil & Tig had arrived, as had Robert B, and Michael had emerged as well. Joe & Sam soon arrived from Kenton, by car, with their bikes sticking out the back of the boot. Now we were only waiting for Philip, who Joe said had left Kenton at the same time as them, but by bike, so would be a little while yet before arriving. When Philip finally arrived some half an hour after we planned to meet (with the excuse he had been looking for a map) we only had 45mins to get to Cotton our first tower

With the cyclist arriving just under 15mins late, the oldies that declined the opportunity to cycle proved they are not completely over the hill by getting the bells up! Now I must to admit to being slightly apprehensive as to how well the ringing would go at Cotton. I need not have worried- everyone should be pleased with the way they rang on one of Suffolk’s more tricky eights. Our second tower of the day was Gislingham, which are a fantastic eight. However just because a ring of bells are ‘easy-going’ doesn’t mean you can just stop concentrating and expect the bell to ring itself- you still need to make sure you are in control of your bell for it to be in the right place. I think a few of our ringers forgot this and consequently the ring here was not what it should have been!

The next destination of the day was the White Horse at Stoke Ash where the cyclists enjoyed a well earned rest and shelter from the rain, which only seemed to fall when we were actually cycling. The food arrived promptly and was just as rapidly consumed. With some of the ringers leaving us at lunch the rest of us set off to the third tower of the day Thornham Magna - a church with a fabulous setting overlooking Thornham Park. Thanks to St John who let us in and also raised the bells for us prior to our arrival. Our final tower of the day was Wickham Skeith, where we enjoyed some of our best ringing of the day. After an obligatory photo outside the tower (which I note many of you actually managed to escape from) the cyclists were left with a pleasant cycle home, and it didn’t rain even in spite of an ominous dark cloud, which looked very much like it would drench us once again.

Thanks to Robert Beavis for organising the towers, and to Philip Mutton for arranging the pub and to for everyone else for turning up; it is great to see so many at Debenham showing continued enthusiasm for ringing, long may it continue!