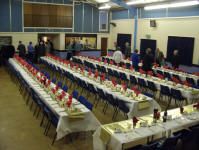 All roads led to Woolpit Village Hall as the evening of 15th March heralded the eagerly awaited Guild 85th Anniversary Dinner. The chance for a convivial gathering of this type comes but once every five years. On entering the Hall, the tables were resplendent in their red and gold trim. The Guild Master and Secretary, ably assisted by Ruthie and Chris, had been busy during the afternoon, and the scene was set for many good things to come. 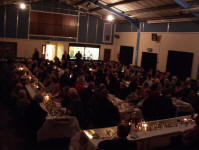 Conversation flowed as members and friends gathered around the bar. Much thought had gone into the seating plan, and such was the attention to detail that in each place lay a programme with the person’s name and menu selections. This individual touch was obviously the result of hours of work by the Guild Secretary, providing everyone with a souvenir card to take home. As we sat down, the fluorescent glare was extinguished. In the warm glow of tea lights, the Chairman welcomed all and invited the new Bishop of St Edmundsbury and Ipswich, The Right Reverend Nigel Stock, to say Grace. 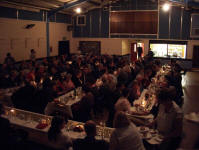 One might, perhaps, have been forgiven a degree of apprehension about the £15 ticket price, but any such thoughts soon melted away. The organisers’ aim of a truly inclusive event was achieved in fine style as we were treated to a first class meal, served promptly and piping hot. Nothing was too much trouble for the attentive waiting staff. An excellent choice of desserts ended a superb meal. As we sipped tea and coffee, Maurice Rose stepped forward to propose a Vote of Thanks to Bishop Nigel and Mrs Stock for their attendance, and to the Organiser-in-Chief, Mary Garner. Both Mrs Stock and Mary were presented with baskets of flowers. A hearty round of applause followed for the Caterers, with widespread appreciation being expressed up and down the hall. 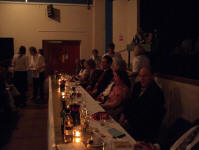 The Chairman, Winston Girling, opened the Speeches. He was delighted that the event had been a sell-out. Indeed, the 140 tickets had been snapped up very quickly. He said how good it was to see so many ‘first timers’ at the Dinner. New faces proved the sustained success of the Millennium recruitment drive. Winston then proposed the toast to ‘The Church’ and Bishop Nigel rose to reply.

The Bishop conveyed immediately his enthusiasm for the role of President. He expressed a grateful awareness of the part played by the Guild in the life of the Church in Suffolk. He was impressed by the size of our membership, and that in his first three and a half months in post he had been invited to officiate at two dedications. In an entertaining speech, Bishop Nigel confessed to a background with very little knowledge of bells, having served earlier in his career in the remote location of Papua New Guinea (though even here the Angelus was sounded on empty gas cylinders), and in an urban parish with just one bell, chimed by a rather fierce elderly lady! This changed, however, when he became Suffragan Bishop of Stockport, with a fine ring of ten. Using an amusing anecdote, he gave a perceptive insight into the vital role of bells in proclaiming the presence of The Church to all sections of society in local communities. He thanked Suffolk ringers for fulfilling this task and proposed the health of The Guild.

The evening’s guest speaker was Charlie Haylock, well known author of books on Suffolk dialect, ‘Sloightly on th’ Huh!’ and ‘A Rum Owd Dew!’ Charlie enthralled his audience with hilarious monologues as he depicted his Uncle Charlie as ‘Suffolk Man Abroad’. He provided a captivating mix of humour and informative material on the traditional Suffolk dialect. Amusing examples abounded of the illogical nature of some Suffolk expressions. Listeners delighted in his highly professional ‘whistle-stop’ exposition and performance of regional accents and dialects from around the UK, Ireland and Australia. His knowledge and passion for Linguistics riveted the audience.

Districts and individuals had donated fifteen prizes to the Draw which followed. Charlie made an impromptu donation of one of his books for good measure. Everyone entered into the spirit of the Draw, and £250 was raised for the Guild Restoration Fund. One final individual touch by the Secretary was the randomly generated series of lucky ticket numbers, which enabled everyone with a star printed on the back of their programme to take home one of the delightful table decorations.

Many seized the opportunity to mingle with friends until the bar closed at 11.30pm, rounding off a most enjoyable evening. This had been an occasion to savour, and a huge debt of gratitude is owed to Mary Garner for all her hard work.