Entering the Mitson Shield and Rose Trophy has sometimes been compared to getting into an argument with the late, great football manager Brian Clough, who was famously quoted as saying ‘we would have an argument for twenty minutes and then agree I was right’. The general perception of the Suffolk Guild Striking Competitions amongst many of our members seems to be that teams turn up, ring one after another over the course of an afternoon and then over an evening and then St Mary‑le‑Tower wins.

However, even if you do concede that St Mary‑le‑Tower has won an awful lot of competitions in Suffolk, they are a long way off having completely dominated things. When something is perceived it often plays tricks on your mind. Whilst everyone complains about SMLT always winning, they seem to forget Pettistree’s first win in the 6-bell two years ago at Sweffling, with the Tower a distant third. Or Rendham’s superb success at Tunstall in 2006. Indeed, last year’s victory for St Mary-le-Tower was their first in the Mitson Shield for five years. Although they’d won a few in the early noughties, before that they went seven years without winning it. With a rising Pettistree eight bell band and good representation from many of the districts in the Rose Trophy, these competitions are not the dead rubber many would have you believe. And that’s before I even mention the Lester Brett Call-Change Trophy that offers even more silverware opportunities.

With all this in mind, then it was strangely disappointing – even with a brilliant entry of ten teams – not to have any representation from the west of the county at Hasketon for the Mitson Shield, especially from The Norman Tower who came so close to bringing the Shield back to the west last year.

Nonetheless, a tremendous turnout of ringers – not all of whom were taking part – took advantage of the warmer weather to sit outside listening if they weren’t in the superb Turk’s Head pub in this typically quiet Suffolk village. The large turnout meant a lot of waiting about for some, but what does this matter when there are so many friends old and new to catch up with, quality ale to consume or picturesque countryside - that we seem to take for granted in this part of the world – to take in?

The judges Chris and Alban Forster from Hertfordshire and Germany respectively appeared from inside the toy cupboard they had been entombed in for the best part of the afternoon and after a fantastic tea and a Happy Birthday sing-song for Jane Harper and Stephen Cheek the summing up and results were read. Yes, St Mary-le-Tower won, but it wasn’t by much and Pettistree pushed them all the way. And congratulations to Debenham on winning the Lester Brett Call-Change Trophy, taking it from last years winners Sweffling. But ultimately, well done to all who entered, from Rendham who unluckily failed to finish to St Mary‑le‑Tower who breathed a sigh of relief that they had just held onto the Mitson Shield.

But we weren’t finished yet! Oh no!

The fun continued at Woodbridge, another fantastic place to find oneself during a striking competition, with pubs nearby as well as a park and a wonderful town centre.

Five teams entered this and although the North-West entered a band, there was still nothing from the South-West, a big shame. There’s a lot of talent in that corner of the world and a lot of enthusiasm that we desperately need sharing around the Guild. The competitions are coming your way next year, so 2011 will your chance to join the rest in trying to beat SMLT! Let’s be ‘avin you!

With St Mary the Virgin being a heavy eight, all the teams sensibly elected to ring Triples and indeed all of them rang Grandsire. With St Mary‑le‑Tower drawn last – as with the 6-bell – the other four teams set a standard that was going to be hard to beat. Whether the pressure got too much, it’s hard to tell, but something incredible happened – the touch was miscalled and fired out! Whilst the first 224 changes rung would’ve just beaten everybody else, they had to be disqualified and the North-East were announced worthy winners by the evenings’ judges, David Stanford and Jonathan Dickenson! They didn’t just win by default either. Such was the closeness of the competition, anyone from the entrants would have been worthy winners. It just goes to show that St Mary-le-Tower don’t always get it their own way!

My thanks to the South-East District for organising today and to Jane Harper and Diana Pipe for leading the teas and to Hasketon and Woodbridge for allowing us to use their bells. As I mentioned, 2011 we will be in the South-West, tremendous hosts whenever the Guild travels there and it would be great not only to see some South-West teams but to see one of them win some silverware again! 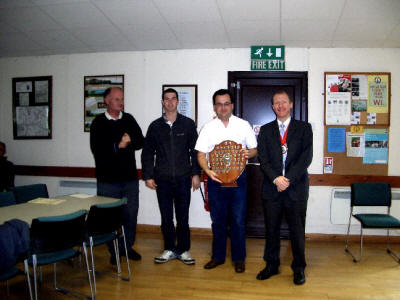 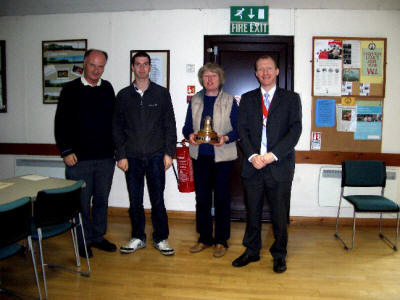 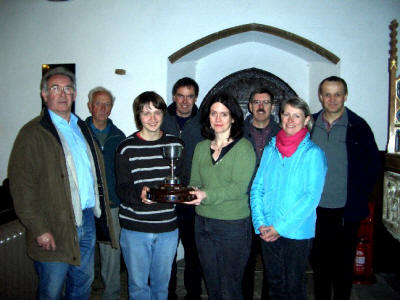