On February 28th, 6 ringers from Halesworth in the NE District met at Rumburgh to ring what was probably the first peal by a band entirely from Halesworth for over 100 years. The research I did to find this out was fairly limited as peal records pre-1975 are not very easy to access yet. However, peals were rung by a local band at Halesworth in the 1800s and I found evidence of one in 1906. With bells at Halesworth derelict for part of the early 20th century and a ban on all ringing during the Second World War, the band obviously took a downturn. Over recent years, it has gradually built its strength back and a peal proved an excellent way to demonstrate that we really are a strong team again.

Not only was the peal a significant milestone for the band, there were a host of notable achievements for individuals too. For Dominic it was his first peal. Jason managed to ring a peal “by mistake” last year, but this was his first inside. Philip, who conducted the peal, had officially “retired” in 1997 when he reached 100 (peals, not years old), but succumbed to peer pressure/sense of duty/persuasive tower captain for this occasion. At then end of last year, we welcomed Pete Lock back to ringing, who has proved to be an asset to the band; this was his first peal since 1991. Neither Veronica nor I would normally be classed as keen peal ringers, but having actually rung a peal this century made us the ones in practice….scary.

The decision was made to attempt a 6-bell peal, and neighbouring Rumburgh seemed ideal, as the bells are so much lighter and easier to ring than ours - we actually took 2 hours 32 minutes to complete it. There was a brief false start, due to my sudden realisation that even though we were starting at 3.30 in broad daylight, it was going to be dark by the time we finished, so switching the lights on would be a good idea. Thank goodness my mind wandered then and not an hour later!

The peal was rung 2 days after we heard the sad news about Reverend Alan Deering’s unexpected death. Alan was one of the team priests in the Blyth Valley Team and died while on holiday in Gozo. We were all keen to dedicate this peal to his memory. 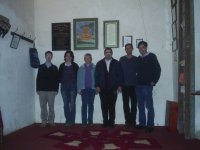 I don’t think this will be a regular occurrence. However, it was a great team effort and we all felt very proud of our achievement. Even if peals don’t become de rigueur in our area, there are an increasing number of quarter peals being rung and the method ringing on our practice nights is becoming steadily more confident and competent. As ever, anyone is welcome to join us on a Tuesday evening.