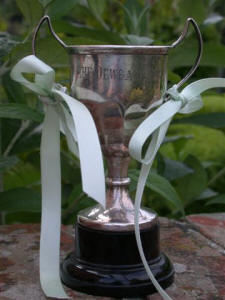 For the second year running, members of the North West District gathered at Barrow on 13 June for their annual Striking Competition and barbecue. Another convivial encounter of the ringing kind was enjoyed by over 30 people in lovely weather, and it was wonderful to welcome lots of people who were both new to ringing and to Striking Competitions. Special mention must go to the tenacity of the Great Barton ringers, a brand new band, for not only entering but for coming a very respectable 4th.

The eight teams in this year's competition were striving to win the Dewbank Cup, a new acquisition for the District and considered a great investment at only 10p from a bric a brac stall. Newly cleaned and adorned with ribbons it stood proudly in the ringing room as an incentive to the ringers to produce their best!

The rules of this competition are very relaxed in order to encourage the greatest possible number of people to enter. Teams ring for five minutes during which they ring as many or as few call changes as they like. There are no rules about who can or can't ring and so if individual wants to take part but doesn't have a team to ring with they can be fitted in to another team who is short. It's interesting though, that despite the lack of rules, every team which entered would have satisfied the Guild's rule 3.1 for the Lester Brett Trophy (well except the Young Ringers but they all looked pretty young). The judge for the day was Jonathan Dickenson of Swaffham, former Ringing Master of the NDA and a good friend of our District. It was a shame his wife Beccy couldn't make it as we had hoped, but Jonathan did a great job on his own, and we thank him for his time and constructive comments.

When all 8 teams had rung it was over to the Rectory garden for the results and a fantastic barbecue masterminded by Paul Stannard, and assisted by Chris and Kay Nunn and members of Paul's family.

(I have mislaid the piece of paper with the number of faults for each team but hopefully will be able to find it soon!)

Thanks to everyone who made this yet another successful and enjoyable district event, and see even more of you next year! (Same time, same place, second Saturday in June!!)