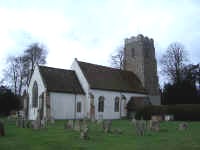 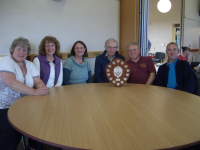 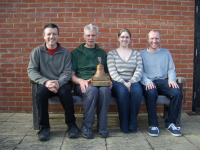 The force was strong within the galaxy of Brandeston, as teams gathered on the aforementioned ‘Star Wars Day’, where indeed the empire was about to strike back! The church was filled with eager participants, young and not so young, all waiting for the draw. For some, the draw was favourable. In other words, I waited a long time to ring!

12 teams had come to compete in the method and call change categories, with the hope of securing the new call change trophy donated by the Scase family in memory of David Barnard. The standard of ringing was excellent, with teams from across the district, including Barking, Helmingham, Hollesley and a band of youngsters from Sproughton all in contention of winning the prize.

The weather was glorious, with the emphasis on WAS. We started with glorious sunshine, for it to then turn into rain at the drop of a sunhat. However with the village hall open and the kettle on, everyone was well looked after!

Once the last team had done their bit, it was back to the village hall (for those not already avoiding the weather) for a fine example of a ringer's tea. Then it was time for the results. Judges Chris and Margaret Bulleid had their work cut out, and began by saying how brilliant it was to see so many people competing, and with such a good standard of ringing. Congratulations must go to Hollesley, the first ever winners of the David Barnard call change trophy, and to St Mary-le-Tower ‘A’ on winning the method trophy.

Many thanks to Chris McArthur and his band of Jedi helpers who kept everybody watered and organised the hall and the tea, for permission to ring and anything else I’ve forgotten to mention. Finally, thanks must go to Tom Scase for organising the judges, and for keeping everybody ‘in check’ throughout the day.

Well done to everybody who took part, especially if it was your first experience of a striking competition. Here’s hoping that next year we will be able to equal this success!